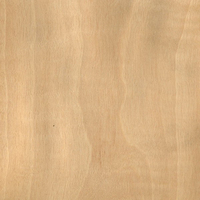 The genus is widespread in tropical Africa, particularly common in parts of East Africa.

May reach a height of 180 feet with a clear cylindrical bole to 80 feet; trunk diameters above tall symmetrical buttresses 3 to 4 feet.

Has a medium texture with closed pores similar to maple. Growth rings aren’t always well-defined, and the wood can be rather plain-looking; though certain figure is occasionally present, such as curly or mottled grain.

Generally reported to saw and machine well, but some species are silicious and have a blunting effect on cutters; rather difficult to finish; cuts well on rotary lathe or slicer.

It’s commonly used for plywood and interior furniture; in board form it’s used for boatbuilding, general carpentry, and other light construction uses.

Look for Anigre to be priced close to other commonly imported lumber such as Padauk or Purpleheart.